The Story of Turkish Baklava from Past to Present

Turkish baklava developed from the pastry culture of nomadic Turks and then took its current form in the Ottoman baklava in palace cuisine. It has nothing to do with kopti, the Greek confectionery.

At the end of the 18th century, Guillaume, the former confectioner of the French Queen Marie Antoinette, brought a dome-shaped famous Turkish baklava like a pastry, made by rolling the dough differently and folding the dough. This baklava was called “Frenk Baklava” or “Palace Baklava“. Until the last days of the Ottoman reign, Turkish baklava was the most favorite dessert of special occasions in the palace cuisine. For example, it is seen that baklava is on the menu of the last Ottoman sultan Vahdettin’s lunch on Friday, April 30, 1336 (1920) at Yıldız Palace.

Regardless of the ethnic origin of Turkish baklava, which opened a new era in Ottoman cuisine, it would be logical and correct to consider it as belonging to the Ottoman culture, which we are sure to have developed and taken its current form.

The Emergence of Baklava

Since the nomadic Turks did not use an oven, they could not make full bread; It is known that they ate the phyllo that they baked on a portable sheet as bread. Even today, in many regions of Turkey, phyllo dough is baked on a sheet as home bread. It can be accepted that the nomadic Turks, who recognized yufka as a staple food, created layered pastries by putting various mortars between the yufka that were opened and cooked one by one. It is also possible that they used sweeteners such as cream and honey as a mortar and made dough desserts from multi-layered dough. These can be considered the origin of Turkish baklava.

The word baklava is used as baklava or broad bean in old Turkish. It has also been stated that the name baklava may have been derived by adding the Turkish verb suffix -v to the Mongolian word “bakla-” which means “to tie, to wrap”. However, the verb bayla- in Mongolian is also a quote from old Turkish. Contrary to popular belief, the word has no etymological connection with the Arabic word bean.

If you search for information about Turkish baklava on the Internet, you will come across not only Turks, but almost all tribes from the Middle East, the Eastern Mediterranean and the Balkans. Greeks, Bulgarians, Armenians, Jews, Arabs present baklava as their traditional sweet.

Considering that the Middle East, the Eastern Mediterranean and the Balkans once constituted the Ottoman geography, it can be considered that the Turkish baklava is described as an Ottoman dessert. However, since the “Ottoman” is perceived as “Turkish“, this characterization is not welcomed, especially by the Greeks and Arabs.

The Greeks claim that the Turks got the baklava from Byzantium. Professor Speros Vryonis, who tries to prove this claim, writes that the dessert called kopte or kopton (koptoplakous), which was very popular in Byzantium, resembles baklava.

According to American journalist Charles Perry, who defends the thesis that baklava is not of Byzantine but of Central Asian origin, kopte is not a pastry like baklava, but a kind of confectionery. It was made by adding honey mixed with it.

Sula Bozis, a Greek from Istanbul, in her book on the culinary culture of the Greeks of Istanbul, talks about a Byzantine dessert called kopti, which is made with a mixture of walnuts, sesame and honey, pounded in a mortar, between two thick phyllo dough. He came across the recipes of this dessert in old cookbooks from the Greeks.

If kopte, a sesame paste-based confectionery, turned into a phyllo-based pastry, it may have turned into a multi-layered phyllo-based baklava later on. However, it is also necessary to explain how yufka entered the Byzantine culinary culture.

Almost all societies in the Middle East, the Eastern Mediterranean, the Balkans and the Caucasus; Turks, Arabs, Jews, Greeks, Bulgarians, Armenians introduce baklava as their traditional dessert. Considering that these regions were once included in the Ottoman geography, baklava is described as an Ottoman dessert as said before. However, due to the perception of the Ottoman Empire as Turkish, this characterization is not welcomed, especially by Greeks and Arabs. However, the European Union Commission registered on 8 August 2013 that baklava is a Turkish dessert.

Whether the origin of baklava is in ancient Greece, Byzantium, or in the nomadic period traditions of Turks or Arabs, it must be admitted that it took its flamboyant and sophisticated form, which can be defined as today’s classical fresh baklava, during the Ottoman period.

There’s no denying the truth that the dessert we appreciate nowadays was culminated amid the Hassock Domain, after it involved Constantinople (today’s Istanbul) within the 15th century. And for over five hundred a long time, the kitchens of the Hassock Realm Royal residence in Constantinople got to be the empire’s extreme culinary center.

The oldest Ottoman record of Turkish baklava is in the kitchen notebooks of the Topkapı Palace from the Fatih period. According to this record, baklava was baked in the palace in the month of Sha’ban in 878 AH (1473). Evliya Çelebi, who was a guest in the mansion of Bitlis Bey, far from Istanbul in the middle of the 17th century, writes that he ate baklava. In Vehbi’s “Surnâme”, which tells about the magnificent circumcision wedding held in 1720 for the four sons of Sultan Ahmed III, it is written that all guests were served Ottoman baklava.

From records such as these, it is understood that Turkish baklava, which is known in almost every region of the Ottoman Empire, was mostly consumed in the Palace, mansions, banquets and festivities.

It can be said that the effort to please the fussy owners of wealth and position has transformed baklava from a simple pastry into a delicate culinary product that requires mastery.

Some researchers, such as Bert Fragner of Bamberg University, record that eating and drinking trends in the Ottoman Empire were shaped according to the tastes and preferences of Istanbul high society.

It is known that in palaces and mansions, chefs who are skilled in making Turkish baklava are preferred and that the baklava dough is rolled very thinly. The mastery of the cook was accepted if the cut biceps were both very thin and sized to completely cover the inside of the tray when opened. According to Burhan Oğuz’s book on the cultural origins of the people of Turkey, in quality baklava made in old Istanbul mansions, the cook was asked to fit at least a hundred layers of phyllo on a tray.

Before the baklava tray entered the oven, it was brought before the owner of the mansion; he, too, would drop a Hamid gold on the baklava from a height of half a meter upright. If the golden dough pierces the layers and touches the bottom of the tray, the cook is considered successful. The gold in the tray went to the cook as a tip. If the gold remained between the layers of dough, the baklava tray was sent back to the kitchen. If this show was held in the presence of guests and failed, the host would consider himself disgraced.

It would not be wrong to attribute the development of Turkish baklava as a separate craft from cooking to this importance in their rich kitchens. Sula Bozis writes that the masters from Chios, who were organized in a guild in the 19th century, were invited to the mansions in Istanbul to make baklava dough.

It has become so customary in the palace customs that even the “Baklava Regiment” has been formed to distribute Ottoman Turkish baklava. According to historical records, in the middle of Ramadan, the sultan distributed 1 tray of baklava to every 10 New Cherry soldiers after visiting religious values such as Hırka-i Şerif.

Even when choosing a cook, two issues have been taken into consideration. First, the cook’s rice will be very good. Secondly, the dough of the baklava he makes will be very thin and its taste will be appreciated.

There is no doubt that the most skillful Ottoman baklava masters are in the Palace. The importance of baklava in the palace was not only because it was considered a sign of wealth and fine taste, as in mansions, but also because it entered the state customs.

The tradition of the Ottoman Turkish baklava procession, which emerged in the late 17th or early 18th century, is the most obvious example of this. In the middle of Ramadan, as the sultan’s compliment to the soldier, baklava would go from the Palace to the Janissary Corps. A tray of baklava was prepared for every ten soldiers and lined up in front of the palace kitchen. After Silahtar Agha took delivery of the first sini on behalf of the sultan, who was the number one janissary, each of the other sinisters was loaded by two soldiers.

Importance of Baklava in Turks

The chiefs of each division were in the front, those carrying the baklava trays were in the back, walking out of the opened doors towards the barracks. The people of Istanbul used to take to the streets to watch the Turkish baklava procession and show their love to the sultan and the soldier. This tradition, which made Ottoman Turkish baklava a symbol of the Ottoman reign, disappeared with the Janissary Corps. The last baklava procession was held two months before the Janissary Corps was abolished.

It would be a right to consider baklava, which gave its name to a state ceremony in the Ottoman Empire, as belonging to the Ottoman culture, regardless of its origin in the traditional culinary culture of any ethnic community.

Baklava, the sultan of desserts, was also seen as the dessert of sultans. The importance of baklava in the palace was not only due to the fact that it was considered a sign of wealth and fine taste, as in mansions, but also because it was included in state customs. The tradition of the Turkish baklava procession, which emerged in the late 17th or early 18th century, is the most obvious example of this.

During the reign of Suleiman the Magnificent, it was customary to serve stew, rice and zerde to the soldiers who went on an expedition. After a while, this custom was abandoned due to the fact that there were not many expeditions. However, this was replaced by a banquet and baklava on the fifteenth of Ramadan, while the ulufe was distributed every three months as a compliment from the sultan to the soldier.

Turkish Baklava Pistachio, Dry, Sugar-free, Chocolate, Pistachio Baklava, Walnut, Carrot Slice, Sütlü Nuriye, Yellow Burmese, Şöbiyet, Homemade, Cold and Milky and many more varieties have survived to the present day with authentic Turkish baklava. Today, the best Turkish baklava is now in baklava shop and you can also buy baklava online. Baklava in Turkey is now very famous and the country that comes to mind when talking about baklava: Turkey. Baklava presently comes in a run of delightful flavors and each assortment has faithful adherents; each one is delightful in itself.

The sweet, crispy Turkish baklava that we realize and love is to be had in special flavors in each metropolis of the world. Some range in that they may be made with special nuts along with pistachios or walnuts, even as others have particular recipes along with Sütlü Nuriye, wherein the milk is blended with sherbet and introduced to yufka after cooking.

Excellent baklava is crafted from homemade skinny phyllo dough. It is likewise essential to apply excellent butter and the proper quantity of sugar withinside the syrup. Lemon juice is frequently introduced to the syrup to forestall the baklava from crystallizing.

While there are numerous varieties of baklava, all of them percentage some simple ingredients: phyllo dough, syrup, and roasted hazelnuts. Like peanuts, peanuts aren’t unusual to place in making Turkish baklava. 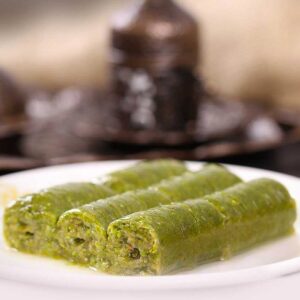 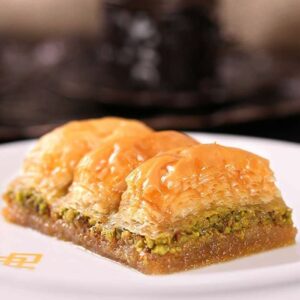 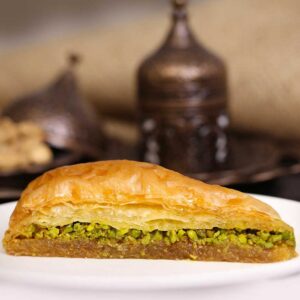 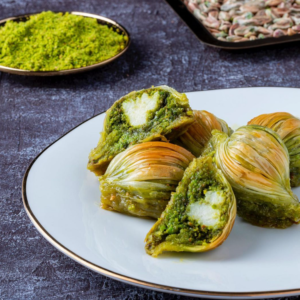 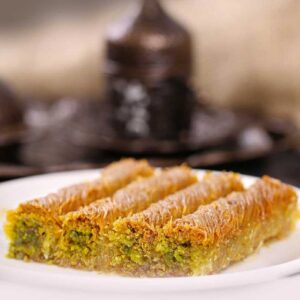 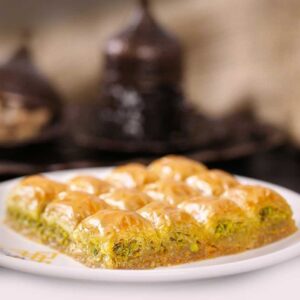 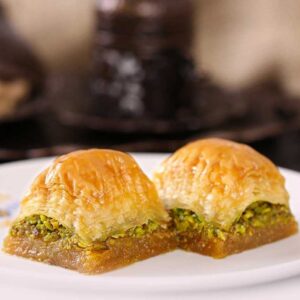 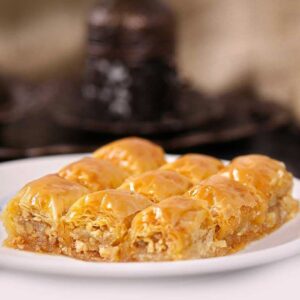 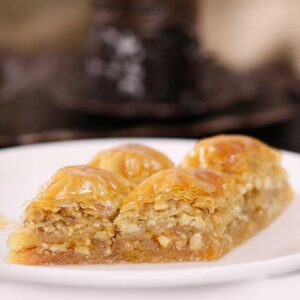 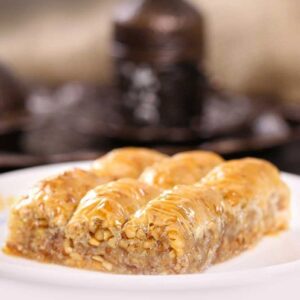 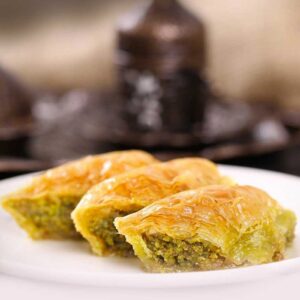 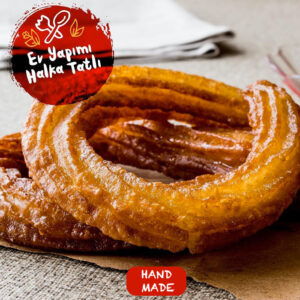